Don’t get too serious when talking about politics. Don’t get emotional. Don’t get excited. It’s all a big show and what they want is you getting excited. If they can get you to get excited in one way and somebody else in another way and then clash you together – that’s even better because that causes even more excitement. The more emotions – the better. Think of media as of suckers or vampires that feed on your emotions.

END_OF_DOCUMENT_TOKEN_TO_BE_REPLACED

I’ll be making some designs to go along with the blog. Here’s the first one. 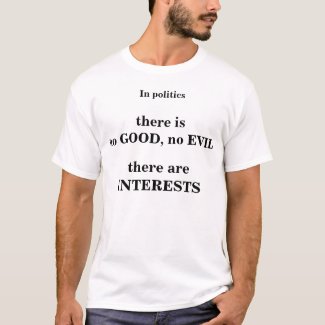 How do you explain to a 60-year old man that USA isn’t bombing for democracy, that countries in general do not spend money on something that does not give them profit? There is no moral norms, no “good” countries” nor “bad countries”, no “tyrants” and no “freedom” – there are interests, that’s all. How do you explain that “every media reported..” means that the single corporation that owns all of the Western media had ordered to publish this same news report? If you want to find out what happened (that is if anything really happened – which is very often not the case) – you must read the other side, read Chinese media coverage, read Russian, Syrian, Indian, – and then consider the interests do your own investigation, and then you’ll know maybe 10% of the real facts. This is such a world-view change that I don’t even want to attempt. I don’t want to see the tears in his eyes when he realizes that everything he believed in for 60 years is a lie.

It is surprising how little very educated men over 50 with access to Internet and library know about geopolitics. I consider a good introduction to geopolitics to be this book (link to amazon.com for USA):

(link to amazon.ca for Canada):